When Manny Pacquiao started his training in Baguio for his May 7th showdown with Shane Mosley, you can gauge up of how Pacquiao is so focus and gives that much importance in his upcoming fight that he treated his training preparations seriously.

Because of that, you have never heard anymore complaints from his trainer Freddie Roach, as well as his promoter Bob Arum concerning Pacquiao’s distraction since day one.

Though two months shy from showdown time before Mosley turns 40, this is something that Pacquiao doesn’t give so much credence and attention as a distinct disadvantage to Mosley.

Pacquiao has some good reasons, by most probably learning from history that age doesn’t always be an absolute reference in boxing to win fights, a good example is that of George Foreman-Michael Moorer heavyweight title fight in 1994, wherein the challenger Foreman, 45 who was the underdog because of their age disparity KO Moorer, 26, the champion in the tenth round.

Moreover, in last year clash between Mosley and Floyd Mayweather jr., Mosley has been able to demonstrate that he is still capable of pulling the trigger if he sees such an opportunity happening as what he did to Mayweather Jr. in the 2nd round of their engagement that Mayweather jr. almost went down.

Besides Mosley is among the elite fighters who has earned that distinction to have defeated the legendary Oscar de la Hoya twice, and has never been stopped in his illustrious career.

With that said, Pacquiao on the other hand has learned a valuable lesson in his heydays as a boxer that most of his early losses he absorbed is due to over confidence and under training.

That overconfidence drove him to take his opponent lightly. Being then a raw talent requires more effort in improving his skills and shape up his career from a reputable trainer and coach which supposedly should have been there to coach and guide him in that early episode of his career.

It was that dark side of his career that he forcefully trained ill-equipped and be contented to train on any existing amenities available to him at that time.

He has never dreamed that one day that he could come close this far and will be recognized as the p4p king in boxing and become himself an elite fighter if it not of the guidance of his coach Freddie Roach, which he himself has acknowledged and that their partnership has been forging wonders.

With Roach guidance, Pacquiao has learned to brainstorm and lay down his strategy and upgrade his skills by studying thoroughly his opponents’ movements, its strengths and weaknesses and accordingly laid a game plan to suitably execute them whenever he is in the ring against of whoever his opponent laid on his table.

No wonder as what we have always seen in him is an upgraded version of Pacquiao every time he steps in the ring.

Mosley’s declaration that he is going to shock the world by defeating Pacquiao is something that Mosley is taking it seriously. He has never been an underdog in his career by bookmakers of so much disparity a 6-2 in favor of Pacquiao in which according to Mosley is a wanton disrespect of his capabilities as a fighter.

Besides, he has been more hungrier now compared to his previous fights because there is something he wanted to prove to the boxing world that he can still dominate father time in his quest capable of upsetting the regarded p4p king of boxing in the planet, that of a Manny Pacquiao. 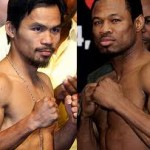