Arnold Schwarzenegger endorses ‘The Governator’ the animated TV series and it would be the star of a comic book series.

The former California governor said that plans for the character are even bigger.

According to him first will come (The Governator) comic books, then a (cartoon) TV series follows and after that they will develop the games and then a movie, Schwarzenegger revealed to journalists during the yearly MIPTV, the International Television Programs Market, in Cannes, southeastern France, according to the report.

Schwarzenegger even rolled out a trailer for the animated ‘Governator’ series, which looks like it will feature a recurring character, an investigative journalist who (in the clip) was voiced by Larry King.

In the article, Schwarzenegger confirmed he’ll be acting ‘in front of the camera’ again very soon, and would be announcing his next project soon. 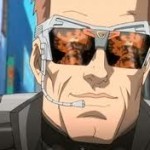