The Bb. Pilipinas beauty contest that send the top 3 winners to represent the Philippines to the Miss Universe, Miss International and the Miss World pageants respectively has disqualified three candidates over allegedly the girl’s nude photos that recently circulating on the internet.

With the girl’s disqualifications, it has brought down to 37, the number of official candidates to compete in the 2011 Bb. Pilipinas beauty pageant.

BPCI stressed that the contests is governed by strict rules and policies. “The ladies were subsequently removed from the official roster. We hope that all speculations regarding this incident will cease. BPCI is not incline to delve into the issue any further in order to preserve the integrity of the pageant and the reputations of all concerned parties,” it said in a statement.

The Bb. Pilipinas pageant will be held on April 10, 2011 at the Araneta Coliseum, Quezon City. 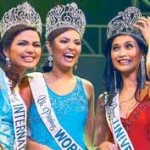