Tiger Woods announced on his website Wednesday, July 20, 2011, that he and Steve Williams, who have been together since March 1999, will no longer be working together.

Williams has been with Woods for some 250 tournaments, that produced 72 wins and 13 majors.

“I want to express my deepest gratitude to Stevie for all his help, but I think it’s time for a change,” Woods said in a statement on his website.

Woods did not say who would replace Williams, one of only two caddies he has employed on a regular basis or when he might return to golf.

Williams has been very disappointed that his successful partnership with Woods has ended. He declined to say whether Woods gave him a specific reason.

Williams said he met recently with Woods in a board room at Aronimink after the final round of the AT&T National on July 3, and Woods has told him that they would no longer work together. 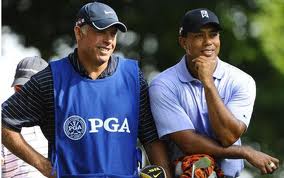