There is something behind the current parakeet population boom escaped from British pet cages or were intentionally released by their owners.

The great mystery is what allowed the exotic bird parakeets to procreate with such phenomenal success just in the past decade.

Researchers at Imperial College London are now trying a more scientific census through its Project Parakeet, which enlisted birders around the country for simultaneous counts recently.

Dick Hayden, a retiree who was volunteering at Long Lane Park here in the Western suburbs of London said that he was delighted to see a parakeet in his yard but when he saw a flock of 300, it’s a different matter.

“They eat all the berries. They ate all the food from my feeder in one day; it was ludicrous,” Hayden added.

Native to the Indian subcontinent and sub-Saharan Africa, the parakeet is enjoying a population explosion in many London suburbs, turning a once exotic pet into a notorious and an annoying pest that awakens children, monopolizes garden bird feeders and might threaten British crops.

British officials are watching trends closely since the parakeets have proved major agricultural pests elsewhere, ravaging crops in places like India. So far they have shown little predilection for leaving Europe’s cities and suburbs for agricultural areas.

Some scientists suggest that a slightly warmer climate has indeed helped tip the balance, perhaps increasing the parakeet’s metabolism during its February breeding season, bolstering the growth of some of its favored food or killing off a predator.

There is also concern that the wily parakeet will outcompete more restrained British birds like the nuthatch, since both species nest in holes in old trees. 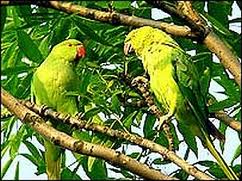 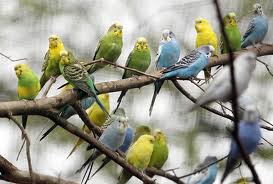