After missing three months from the game due to a leg injury, Tiger Woods has yet to stabilize his rhythm.

He finished in the final round of the WGC Bridgestone Invitational at Firestone with a 70 to tie for 37th, 18 shots behind.

Woods had opened strongly with two birdies on the opening five holes before he “absolutely lost it” with his game.

“I had it in spurts this week,” the former world number one told reporters after finishing well down the leaderboard at one-over 281. “I hit it really well, and then I’d lose it and get it back.

Woods found a few positives out of his first time playing golf since May 12 because of injuries, and his first time completing 72 holes since April at the Masters.

“Absolutely encouraged,” said Woods. “I hadn’t played. I mean, this is my first tournament since, what, April? So it’s been awhile.”

“I got off to such a great start,” he said. “Then all of a sudden, I just absolutely lost it.”

He still has the PGA Championship next week in Atlanta, although Woods said he would not play the Wyndham Championship in North Carolina, the final event to qualify for the FedEx Cup, even if he is outside the top 125.

Woods has been hitting balls on the practice range after his rounds, an indication that his left leg is no longer causing any problems. His biggest obstacle now is time. He has three days of practice before the final major of the year. 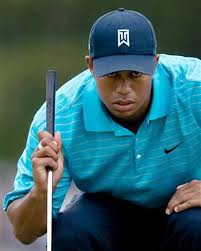