The insects are already a major source of protein elsewhere in the world.

Caterpillars and locusts are popular in Africa, wasps as a delicacy in Japan, crickets are eaten in Thailand. Yet in Europe, as in the United States, most people consider them, well pretty disgusting.

Michel van de Ven, 38, and his brother Roland, 40, have been raising insects for 12 years. They export 40 percent of their stocks to pet shops; only 1 percent or less goes to supermarkets.

Dutch breeders of insects, who until now have supplied the market for pet food have jumped at an opportunity to open a new market and have founded a trade organization to promote the idea.

The government is backing them, and last year it appropriated US$ 1.4 million dollars for research into insects as food, to prepare legislation governing insect farms, health, safety standards and marketing through retail outlets.

The idea has the backing of the United Nations Food and Agriculture Organization, which warns that the production of meat like beef and pork as sources of protein taxes the environment, estimating that almost one fifth of all greenhouse gas emissions comes from livestock that has contributed to climate change.

Johan Van Dongen sells insects. The head of the meat department at a Sligro store here, he also offers meal worms, locusts and other insects, as well as prepared products containing insects like Bugs Sticks and Bugs Nuggets, not for pets, but a source of protein for people.

On a recent afternoon he arranged two sample stands, one with chunks of chocolate laced with ground meal worms (larvae or a type of beetle), another with whole insects, worms and crickets in small plastic containers.

Silvia van der Donk tasted some and smiled approvingly. Her daughter Melanie, 21, recoiled. “I ate locusts once,” said “I didn’t like the texture.”

The efforts of Mr. Van Dongen and Sligro, a chain of 25 stores throughout the Netherlands, are part of a drive to convince the Dutch that crickets, worms and caterpillars are healthier sources of protein, and are less taxing on the environment, than steaks and pork chops. 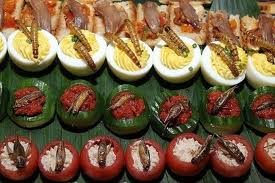 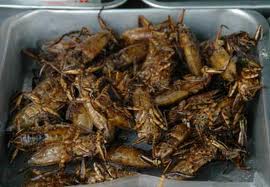