Former world no. 1 Tiger Woods suffers a setback when he sustained a left leg injury that force him to quit after he hit off the 12th tee during the final round of the Cadillac Championship golf tournament on Sunday, March 11, 2012 in Doral, Florida.

Woods was seen driven away in a cart during the final round. The injury he sustained would put his participation in doubt heading into the Masters.

It’s the third time in three years that Woods has withdrawn from a tournament.

The 14 majors title holder is scheduled to play in two weeks at Bay Hill, his last tournament before the Masters.

Woods is a four-time champion at Augusta National, and with an ordinary game, he still has tied for fourth the last two years.

Woods changed shoes at the turn and was limping noticeably, especially after he pulled his second shot on the par-5 10th, leading to bogey. The limp grew worse, and moments later, Woods was gone.

For this year, Doral was his third straight tournament. He lost in the second round of the Match Play Championship, then shot 62 to tie for second a week ago at the Honda Classic. 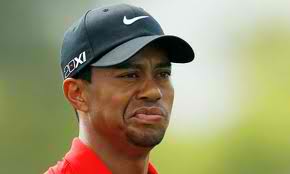