The Greenland ice sheet is more sensitive to global warming than thought, for just a relatively small, but very long term, temperature rise would melt it completely, according to a study.

If global warming were limited to 2 degrees Celsius (3.6 degrees Fahrenheit), a target enshrined in the UN climate-change negotiations, complete melting would happen on a timescale of 50,000 years, according to the study.

Current carbon emissions, though, place warming far beyond this objective. If they were unchecked, a fifth of the ice sheet would melt within 500 years and all would be gone within 2,000 years, the study says.

Greenland is second to Antarctica as the biggest source of locked up water on land.

If it melted completely, this would drive up sea levels by 7.2 meters (23.6 feet), swamping deltas and low-lying islands.

The probe is authored by scientists from the Potsdam Institute for Climate Impact Research (PIK) and the Universidad Complutense de Madrid.

The ice sheet is vulnerable to a kind of vicious circle, also known as a positive feedback, that cranks up the melt, according to the paper.

Reaching over 3,000 meters (10,000 feet) thick in some places, the ice sheet today benefits from the protective effect of higher, cooler altitudes.

But when it melts, the surface comes down to lower altitudes which have higher temperatures, and this accelerates the cooling, the computer models show.

In addition, patches of land that become exposed by ice absorb solar radiation because they are darker and do not reflect the light. As they warm up, they in turn help melt the ice nearby. 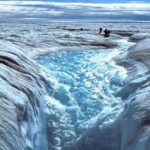