Tiger Woods will not be participating in the AT&T National next week outside Philadelphia as he still recuperating from his left leg injuries.

He said he hurt his left knee and Achilles hitting a shot on the 17th hole of the third round from an awkward stance in the pine straw.

Woods would be at Aronimink to support the tournament where his foundation, the Tiger Woods Foundation is a beneficiary.

He would be there to sign the “We Salute Our Heroes” tribute wall in which fans can write personal messages to the U.S. military.

Woods, who has slipped to No. 17 in the world ranking, is still optimistic that he can duplicate Jack Nicklaus’ record of 18 professional majors in his belt.

Woods’ record stands at 14 professional majors, so 4 more to go to equalize Nicklaus’ feat. Nicklaus achieved the record when he was 46, so now at 35, he’s still has so much time left according to Woods.

The golf landscape this time has changed, Luke Donald has risen to No. 1 in the world, Rory McIlroy is up to No. 3 while Woods has tumbled to his lowest spot in more than 14 years.

The next tournament on the list is the British Open, which starts July 14 at Royal St. George’s in England. Woods did not mention whether he planned to play the next major. If he did, that would mean two months without any competition before playing the British Open.

Woods said he has been able to putt, and that’s about it for his golf. He said he spends every day in the gym trying to get stronger, not just work on the left knee and Achilles, but his entire body. He said there are as many as three sessions a day, although they rarely last more than an hour.

“We’re testing it every day to see what it feels like,” he said. “You try and push it as far as the leg will go, and then if it doesn’t feel any good, then you bring it back. And each day it’s gotten better. We haven’t had any setbacks, which has been good. But still, it’s not as explosive or as strong as I’d like to be.”

One thing that Tiger Woods wants to be sure this time, that he would not play until he is fit. 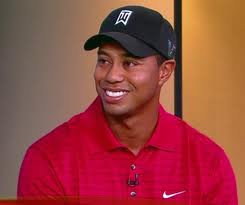