Azerbaijan was once one of the poorest republics in the Soviet Union. Thanks to the Baku-Tbilisi-Ceyhan oil pipeline, money is flowing, and Azerbaijan is now one of the wealthiest.

Over the last ten years, the gross domestic product of this Caucasian country has tripled, to about US$ 52 billion dollars, according to the United States State Department.

That rising wealth has prompted the government to embark on a citywide renovation. In place of low rise concrete apartment buildings and small stores, the government has recruited international companies to construct high rise complexes, department stores and luxurious hotels.

A building boom is transforming Baku from a dull post Soviet city into a glittery metropolis, replete with skycrapers and marble parks. But the development comes at a cost. Families who have lived here for generations are being pushed out of their neighborhoods.

Some have been forcibly removed by the police; in other cases, demolitions have begun while holdouts remained in their apartments, Human Rights Watch reported this summer.

Before the notices started to arrive, Eldusto Elman had a rather clear idea how his life would unfold, at least as far as the living arrangements. He would live in the apartment where he was raised, along with his parents, his sons and, when they marry, their families.

But then the eviction letters started coming, followed by police visits demanding that Mr. Elman and his neighbors move out. If the government has its way, Mr. Elman’s apartment will soon be reduced to rubble.

With a teacher’s pay of less than US$ 250 dollars a month, Mr. Elman could not afford to live in the city if he did not own his apartment. He says the government has offered him about US$ 100,000 dollars for the property, but that is not nearly enough to buy another apartment here big enough for his nine member family.

Residents are not being fairly compensated for their homes. The government pays US$ 1,900 dollars for less than a square meter, but independent appraisals have valued properties in the center of the city at about US$ 5,000 dollars for the same area, Human Rights Watch says.

In this tightly controlled country, residents have little or no means to fight the evictions. According to Human Rights Watch, hundreds of homeowners have lost their residencies in central Baku in the past two years.

To date, the government has refused to respond to its critics, Including Human Rights Watch. 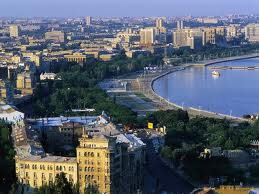