Vitamin D is essential for the immune system, strong healthy bones and teeth, and the absorption of calcium.

Deficiency has been linked to cardiovascular disease, type 2 diabetes, several cancers, and autoimmune conditions as well as osteomalacia, which is the painful manifestation of soft bones in adults.

‘It is important to conduct further studies in order to understand the relationship. A lot of research has been conducted on the risk of vitamin D deficiency.

‘However, there is no scientific evidence for a ‘more is better’ argument for vitamin D, and our study does not support the argument either.’

They claim, in a ‘surprising’ finding, that too much of the sunshine vitamin may cause almost as much harm as too little.

A new study from Danish researchers found rates of death were 40 per cent up in people with very high levels of vitamin D.

Excess levels of vitamin D in the blood are linked with higher death rates, warn researchers.

It found a link between higher death rates when vitamin D levels fell to the lowest level and when they soar to the highest level.

Data from the UK’s national nutrition survey showed no Britons had levels of vitamin D as high as those found at the top end in the study, which may have been affected by the fish-rich diet enjoyed by many Danish people, she said.

‘The Danes actually get a lot more sun exposure than Britons and eat a lot of oily fish.’

Although this is healthy in moderation, oily fish also contains high levels of vitamin A which can be harmful and toxins which may have had an effect on people’s health.

‘One-quarter of Britons go into the summer with levels of vitamin D below the level for optimal health, we have the problem of too many people consuming too little of the vitamin,’ she added. 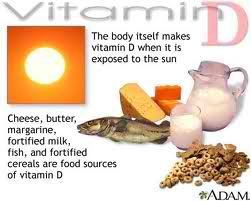