A charity game is the latest in a series of exhibitions NBA players are participating in this offseason during the league’s lockout.

It will be the first time James, Wade and Bosh take the court together since last season’s NBA finals.

The game will be played at Florida International University (FIU) gym. University officials are optimistic that the said event would be a sell out. All proceeds will go to charity including some allocation to educational programs in South Florida.

Heat teammate Mario Chalmers has also agreed to play in the game, as have former Miami forwards Caron Butler (who spent last season with Dallas) and Dorell Wright (now with Golden State).

Other players who have agreed to take part so far include: Jamal Crawford, Rudy Gay, Jonny Flynn, Eric Bledsoe, Lou Williams, Wesley Matthews and Eddy Curry. Many of those have spent at least some time this offseason working out in South Florida.

Details concerning the event are still being finalized and will be known on Wednesday. 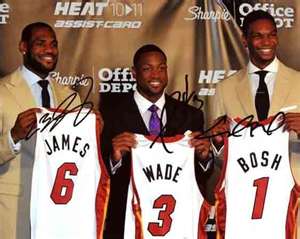