The U.S. One Direction has filed a law suit, asking for a court order to force Simon Cowell’s X Factor UK-formed group to change its name, according to TMZ.

In the charge sheet, the American band One Direction says it formed in 2009, a year before Niall Horan, Zayn Malik, Liam Payne, Harry Styles and Louis Tomlinson had even met to form the British boyband of the same name.

The U.S. group also say it beat their British counterparts to the U.S. Patent and Trademark Office, filing a trademark application before them.

They are also suing Cowell’s record label and Sony Music for US$ 1 million in damages in the federal lawsuit filed on Monday in California Central District Court.

Cowell formed the group on the UK X Factor in 2010. The boys had initially entered the competition as solo contenders.

The five-piece act have recently enjoyed American success, clocking up a No.1 with their debut album Up All Night.

The five-man California band, by contrast, has a much lower profile.

Led by singer and pianist Sean O’Leary, its members began making music at school and the group has played at local fairs and bars, according to their website.

A spokeswoman for Cowell’s One Direction declined to comment when contacted by MailOnline.

The British boyband is currently on tour and have their ongoing show in Australia. 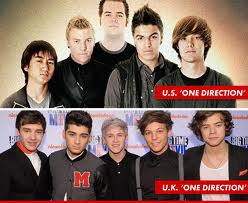