Manila said its largest warship, the BRP Gregorio del Pilar, was in a tense standoff with two Chinese surveillance vessels identified as Zhonggou Haijian 75 and Zhonggou Haijian 84, on Wednesday.

The incident took place at the disputed Scarborough Shoal, a ring of rock and coral.

The two Chinese surveillance ships later approached and positioned themselves between the Philippine warship and the Chinese fishing vessels ‘thus preventing the arrests of the erring Chinese fishermen,’ the statement said.

Both countries dispute the ownership of the shoal, which lies off the Philippines’ northwestern coast.

Del Rosario protested to Ma late on Tuesday, telling her that the Philippine navy would enforce Philippine laws. The standoff continued on Wednesday.

The Philippine Foreign Affairs said that on Sunday, a Philippine navy plane spotted eight Chinese fishing vessels anchored in a lagoon at Scarborough.

The Philippine military then deployed its largest warship, the BRP Gregorio del Pilar, recently bought from the United States.

In one the Chinese fishing vessels, it had found collected corals, giant clams and live sharks Manila said.

The stand-off comes as the Philippines prepares for joint naval exercises with the United States from the 16 to 27 April near the disputed area.

Six countries claim competing sovereignty over areas in the South China Sea, which is believed to contain huge deposits of oil and gas.

Along with China and the Philippines, they are Brunei, Malaysia, Vietnam and Taiwan. 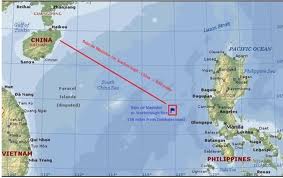 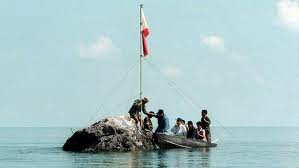