There are a number of ways in preventing soil erosion especially in a sloping terrain. This include brushcover, or matting, where sprouting brushwoods are uniformly spread and secured on the ground to effectively cover the topsoil.

The brushwoods are then covered with top soil to encourage the growth of shoots and become effective soil cover.

On slopes where a more stable soil strata like loam and clay and with moderate gradient, a plantation with any appropriate species can be sufficient to protect the soil from erosion.

Depending on the extent of potential soil loss, spacing of the plants is usually closer than that used in regular plantation.

Fascines involve bundled brushwoods laid down along the contour in ditches. The brushwoods are covered with soil to encourage the growth of shoots and effectively cover the ground.

Benched brush layers are narrow strips of contour benches slightly dug against the slopes. These are planted with brushwoods with butt ends pointing endward. The brush layers are then covered with soil and allowed to sprout to provide permanent soil cover.

Sods, usually grasses that are pressed firmly on the ground to have a good connection with the soil for easier establishment, These are commonly used to stabilize streambanks.

In sloping farms, cover cropping involves leguminous creepers (vines) which are allowed to grow under orchards and coconut farms to provide soil cover and minimize erosion

Crop rotation is the systematic planting of different crops in succession. Grain crops are usually rotated with legumes. This practice improves the soil structure and promotes rapid infiltration of water and reducing erosion.

Grassed waterways are depressions or channels constructed to serve as drainage ways. These waterways are stabilized by planting close growing crops such as crops and legumes.

Bench terraces is an engineering approach to control erosion. It involves the construction of narrow benches on the slopes following the contour of the land. It is aimed to reduce the slope gradient , to minimize surface runoff and consequently soil erosion.

Other engineering approach in preventing soil erosion is by constructing a riprap wall where stones or boulders are piled up along the contour of the land in order to provide an effective barrier against the downward movement of soil and runoff water.

For drainage canals or contour ditches are structures laid along the contour of the land to check the erosive power of surface runoff and trap the soil particles that go along with it.

Minimizing soil erosion is vital in water conservation, because it allows for sustained water flow in natural water channels and spring. 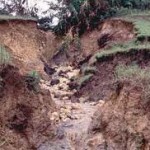 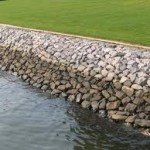