Vast amounts of plastic have been dumped into the ocean over the last few decades.

Bottles and bags are obvious, but the majority is made up of fragments less than 5 millimeters across. Much of this ‘microplastic’ ends up in the Great Pacific Garbage Patch.

For many marine animals, tiny pieces of plastic are a big problem. But for one marine insect, they are a handy place to lay eggs.

The vast swirl of plastic waste floating in the North Pacific has grown 100-fold over the last 40 years, according to a research paper published Wednesday.

And scientists warned the killer soup of microplastic, particles smaller than five millimeters (0.2 of an inch), threatened to alter the open ocean’s natural environment.

In the period 1972 to 1987, no microplastic was found in the majority of samples taken for testing, said the paper in the Royal Society journal Biology Letters.

Today, scientists estimate the swirling mass of waste known as the North Pacific Subtropical Gyre (NPSG) or the Great Pacific Garbage Patch, is roughly the size of Texas.

The United Nations Environment Program says around 13,000 pieces of plastic litter are found in every square kilometer of sea, but the problem is worst in the North Pacific.

The plastic particles are being vacuumed up by marine life and birds, and the mix is heavy with toxic chemicals.

To find out how the Garbage Patch affects local ecosystems, Miriam Goldstein and colleagues at the Scripps Institution of Oceanography in La Jolla, California, monitored the Pacific pelagic water strider (Halobates sericeus).

Between 1972 and 2010 the amount of microplastic in the Garbage Patch increased by two orders of magnitude. Over the same period, the water striders became significantly more abundant. They lay their eggs on hard surfaces, so the microplastics came in handy, says the team.

The plastic is effectively creating a new habitat, says Richard Thompson of Plymouth University, UK, and there will be knock-on effects.

The study said the NPSG is providing a new habitat for ocean insects water strider or sea skaters which prey on plankton and fish eggs and are in turn fed on by seabirds, turtles and fish.

The insect, which spends its entire life at sea, needs a hard surface on which to lay its eggs, previously limited to relatively rare items like floating wood, pumice and sea shells. 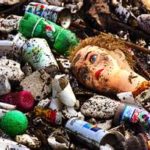 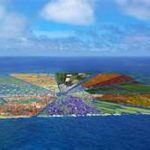