Despite Viloria being the champion he was the underdog in the fight, bookmakers favored the challenger Segura being in the no. 9 pound for pound rankings and the conqueror of Ivan Calderon, the undefeated Puerto Rican flyweight champion, whom Segura defeated twice by stoppage late last year and early this year.

The bout started with exchanges of heavy blows from both fighters with Viloria got the upperhand when he managed to land his left hook with accuracy in successive fashion as the bout went on at the upper right temple of Segura’s head that developed later into a big lump.

The end came in the eighth round when the referee noticed the Mexican challenger being hurt when Viloria’s punch again landed on the same spot of the lump and for safety reason on the part of the challenger, the fight was stopped by the referee.

With the win, Viloria could be the likely candidate to replace Segura in the pound for pound ranking of elite fighters . 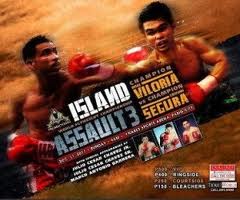