Warner Bros. spokesman confirmed that their legal team sent notices to Charlie Sheen, the FX network and production company Debmar-Mercury, warning them they infringed copyright by using the ‘Two and Half Men’ pictures for their own benefit.

Sheen has been sent a cease and desist letter by the company’s lawyers after he used images from the show to drum up interest in his show ‘Anger Management’.

Executives at Warner were fuming when the actor used images, including one of himself on an Harley Davidson motorbike, as part of his promotional materials for his Anger Management booth at a recent TV convention.

Sheen and his new partners were busy pitching the June debut of their show to domestic and international buyers.

The Platoon star has since blasted his old bosses for their behavior in a bizarre rant, saying: ‘I’m thrilled. It insulates me from having to redundantly see myself in the idiotic bowling shirt.”

It is just the latest development in the Hot Shots star’s long-running feud with his former bosses.

Sheen recently commented that the top comedy show should be taken off air by the end of the year, despite praising Ashton Kutcher for taking over his role after he was fired for his drug fueled outbursts.

The Wall Street star, who became the highest paid actor on US TV during his stint on the program, also took another swipe at its creator Chuck Lorre.

The pair were involved in angry verbal exchanges that led to Sheen being fired from his US$ 20 million a year starring role alongside Jon Cryer.

And in clear criticism of Lorre, he added:’ I don’t think that (Kutcher’s) working with the best writing because Chuck is doing too many shows.

‘He and Jon and Angus deserve better material. They deserve what I had for the first five years.’

Sheen, 46, made his comments in Miami, Florida, while promoting his TV comeback show, which is a TV version of the Robert De Niro film Anger Management. 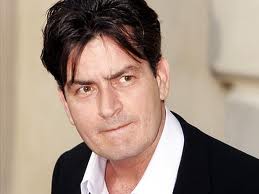