There is an impasse between the UK and Ecuador governments, when the latter has given political asylum to Wiki-leaks founder Julian Assange despite the impending extradition of the Australian by the UK to Sweden.

The 41-year-old Assange, who has been holed out in the Ecuador embassy in central London since 19 June this year, has avoided the extradition to Sweden, where he is wanted for questioning over allegations of sexually assaulting two women.

Mr. Assange is locked in a diplomatic and political stalemate between the two countries. Ecuador may have granted him asylum, but he still has nowhere to go because Assange could be arrested once he stepped out from the embassy premises by the UK police.

Foreign Secretary William Hague has insisted that the Government would not allow Assange safe passage out of the UK.

Hague further said that the UK Government is ‘determined’ to see Assange extradited to Sweden and that political asylum should not be used to escape the normal court process.

The letter from British officials warned that there was a legal basis to arrest Assange at the embassy, if it continued to shield him, and spoke of ‘serious implications’ for diplomatic relations.

It would take seven days to implement the legal process allowing for an arrest inside the building because the Government would have to give notice.

Ecuador’s foreign minister, Ricardo Patino made clear on Wednesday that his country regarded this as an ‘explicit threat’ by Britain which would be a flagrant breach of international law if carried out.

Assange entered the Ecuadorian embassy after the UK’s Supreme Court dismissed the Australian national’s bid to reopen his appeal against extradition and gave him a two-week grace period before extradition proceedings could start.

It was during this time, while on bail, that he sought refuge.

Patino said Ecuador believed Assange faces a real threat of political persecution, including the prospect of extradition to the US where the Australian said he would not get a fair trial.

Lawyers of Assange say that he fears he could be extradited to the US from there and then tried over Wiki-leaks’ publication of thousands of documents and logs that seriously embarrassed America.

Patino had asked Sweden to guarantee that Assange would not be extradited on to the US to face charges relating to the leak of thousands of diplomatic cables, which caused headaches for governments all around the world two years ago.

The Swedish government refused to give a guarantee. 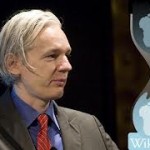