Flood is a perennial problem that besets Metro-Manila during the wet season of the year and yet most local government units (LGUs) do not know that such responsibility is actually theirs as mandated by law.

Most of the LGUs pass wrongly the responsibility to the Department of Environment and Natural Resources (DENR) which is only mandated to give technical assistance and education to the LGUs and their constituents as to the proper disposal of waste and not to protect them from the effects of the flood.

Because of the blatant ignorance of their responsibility, The LGUs has not done anything concrete to alleviate the perennial effects of flooding in their respective area of responsibility, that is why the effects of flooding has not alleviated ever since but it has gone to worst instead because they could always blame climate change without doing any effort addressing the basic culprit of the problem, that is of clogged waterways.

If they really did their obligations, they should have prioritized and included them in their programs. Besides the LGUs are in a better position to know exactly the problems and needs within their loocality on how to address them.

LGUs know fully well that the most common problem in Metro Manila’s flooding are clogged waterways due to illegal occupation of informal settlers, outdated drainage system and illegal dumping of garbage in these areas that prevent the water to dissipate immediately to lower grounds during raining time and thus cause the flooding.

As a first step what the LGU needs is a political will to get rid of these illegal informal settlers occupying these esteros, relocate them where ever possible and make an ordinance meting stiff penalties prohibiting the dumping of garbage on waterways.

The second step is for LGU to organize a dredging manpower and acquiring dredging equipments of their own to regularly maintain the dredging of these waterways under their area which has not been dredged for decades, the silt and the rubbish that have settled down at the bottom of these waterways rendering the water to be stagnated thus overflowing its banks during the rainy season.

The third step is to pass an ordinance obliging stores, public markets, supermarkets or any commercial establishments to strictly use only biodegradable materials in any form of packaging with a corresponding penalty to violators.

The fourth step is to map out those areas that need the upgrading of their drainage system which most probably outdated, silted and clogged by rubbish, either by clearing their inverts or changing them with bigger diameter pipes.

The fifth step is to maintain the pumping stations within their area of responsibility to make it efficient at all times by properly maintaining them and they should always think a ready spare pumps that can immediately be operational if one or two pumps bogged down at the same time.

The last step is to make an ordinance with a corresponding fine or penalty obliging all the barangays the proper disposal of rubbish and barangay captains to report any destroyed or clogged drainage that needs immediate repair and attention to the mayor in their respective locality.

As to the Pasig & Marikina rivers, the cleaning, clearing and dredging operations would be a collective effort among LGUs to thresh out the best possible way of doing it with proper coordination to avoid any blaming game among them.

In the case of some parts of Malabon which has been underwater whether it’s rainy season or not, a perimeter dike near coastal lines by enclosing this low lying area to prevent sea water to seep in as well providing pumping stations just like what has been done in Amsterdam, Holland where the city’s elevation is below sea level, which is probably the ultimate solution for Malabon to get rid of being underwater.

However, there are budgetary concerns why this project has not been done because it needs a big budget to implement the project in this magnitude, this time LGU needs the help of the National government and Congress to allocate a budget for this purpose.

If they don’t have funds to spare, at least the National government could obtain some soft loans from foreign financial institutions to make the project a reality.

Most importantly, LGUs must refrain from engaging of too much politicking if their intention is to help and alleviate the living conditions of their constituents. In short service for the people first before politics. 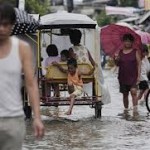 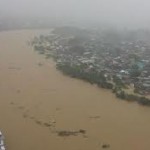