Wikileaks founder Julian Assange is now focus on raising funds to ensure for its future survival.

The announcement came after an ‘arbitrary and unlawful financial blockade’ had been imposed by Bank of America, Visa, MasterCard, PayPal and Western Union which Assange said started since last December.

Assange said Wikileaks must ‘aggressively fund raise in order to fight back against this blockade and its proponents.’

The website Wikileaks temporarily could not provide classified information because of financial trouble.

The former computer hacker said the organization had lost ‘tens of millions of dollars in lost donations at a time of unprecedented operational costs’.

He said the group was taking pre-litigation action against the blockade in Iceland, Denmark, the UK, Brussels, the United States and Australia and had lodged an anti-trust complaint at the European Commission.

Assange is in Britain awaiting a decision by the High Court on the appeal against his extradition to Sweden to face sex assault charges.

The Australian won bail in December and his bail conditions include wearing an electronic tag and daily appearances at a nearby police station.

He fears extradition to Sweden may lead to him being sent to the United States to face separate charges relating to Wikileaks. 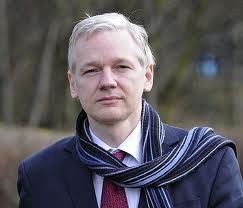