Bee Gees legend Robin Gibb was only discharged from hospital a week ago after treatment of the inflammation of the colon.

Dwina, Gibb’s wife had called the emergency services after experiencing stomach pains at their mansion in Thame, Oxfordshire.

After being discharged last week, Gibb was determined to get back to work as he promoted his new charity single on TV. The singer had obviously lost a lot of weight while spending nearly a week in hospital for treatment.

Arriving to promote his new single with The Soldiers called I’ve Gotta Get A Message To You for the Poppy Appeal, Gibb looked frail and thin after his recent health troubles.

His twin brother Maurice died in 2003 after suffering from twisted intestinal complications.

Last year, Gibb had emergency abdominal surgery to remove part of his intestine after suffering excruciating pain at a concert in Belgium.

It was known afterwards that if his condition had not been dealt with so promptly he could have been dead ‘in two hours’. 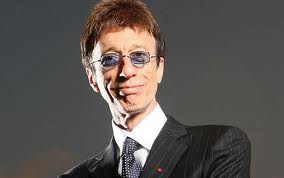