Twenty percent of women with breast cancer who has part of the breast removed, rather than the whole breast, ends up having another surgery, a British Medical Journal (BMJ) study suggests.

Researchers warn that the treatment causes women added ‘emotional distress’ during what is already a very upsetting time.

And the ordeal of having a second surgery will further delay their recovery and return to normal life.

Many women with the illness opt to have partial removal of affected tissue taken out, a process known as ‘breast conservation surgery’.

A mastectomy is a process where the whole breast is removed to better ensure tumors are removed.

More than half of the women who are diagnosed with breast cancer in England choose for breast conservation surgery.

Researchers from the London School of Hygiene and Tropical Medicine looked at 55,297 women who had undergone this procedure between 2005 and 2008.

They found a total of 11,032 had needed a second operation because the first had not completely removed the tumors.

And of these, around 40 per cent had to have their entire breast taken out.

The researchers believe that surgeons are not always removing enough of the affected tissue.

This is partly because there are no proper guidelines telling them exactly how much should be removed. In addition it can be difficult for them to know exactly how widespread the tumors are.

Their study, published in the British Medical Journal, urges them to ‘review their technique’ to avoid women unnecessary distress.

They then looked at procedures carried out in the three months following the first breast operation.

Women should be told of the risk of further operations when choosing surgery, researchers say.

Ramsey Cutress, Cancer Research UK breast cancer surgeon at the University of Southampton, said it was standard practice to discuss the possibility of further surgery with patients.

‘It’s important for patients to fully understand the pros and cons of surgery. The ultimate aim of these repeat operations after breast-conserving surgery is to reduce the chance that breast cancer will return in the breast, and increase survival from the disease.’ 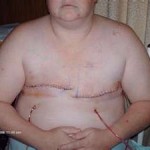