North Korean military chief Ri Yong-ho has been removed from all his official posts, according to state media.

Aside from being head of the army, Ri was also vice-chairman of the powerful Central Military Commission and held top posts in the ruling Workers’ Party.

Ri, who became head of the army in 2009 with the official title Chief of the General Staff of the Korean People’s Army, has often been seen accompanying the young Kim Jong-un on visits to military bases in recent months.

In a terse but short statement, the party said Mr Ri had been removed from his posts ‘because of illness’.

It is not specified what illness General Ri was suffering from, fueling speculation the army chief could have been purged.

Ri is regarded as one of the key figures who has helped support the young, untested leader in the transition following the death in December of his father Kim Jong-il, the longtime leader of the reclusive state.

The general was one of seven top party and military cadres who accompanied Kim when he walked alongside the hearse carrying the body of Kim Jong-il during his funeral.

Ri was seen accompanying Kim recently as the leader paid tribute in a ceremony in Pyongyang to his late grandfather Kim il-Sung on the anniversary of his death in 1994.

Ri’s removal from office has taken many people outside North Korea by surprise and few people are taking the regime’s explanation of ‘illness’ at face value.

His removal is now being scrutinized by analysts for signs about which direction Kim Jong-un, seen as young and inexperienced, will take the country. 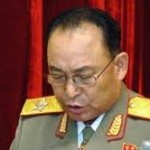