In a study released recently, the world’s smallest group of whale population known as Eubalaena japonica has its population dwindled to almost extinction. The Bering Sea and Gulf of Alaska once teemed with tens of thousands of North Pacific right whales.

But hunting in the 19th century wiped out most of them, with up to 30,000 slaughtered according to the International Union for Conservation of Nature (IUCN).

Poaching by the Soviet Union during the 1960’s claimed several hundreds more, making Eubalaena japonica probably the known species of whale whose population endangered for extinction.
The whale numbering under 50, the eastern North Pacific right whale can reach up to 18 meters in length, falls below the IUCN’s threshold of likely viability as species. A small number of female is worrisome it has said in the study led by Paul Wade of the Alaska Fisheries Science Center.

A genetically distinct population of right whales in the western Northern Pacific is in slightly better shape with several hundreds, but nonetheless listed as “critically endangered” by IUCN.

Right whales across the Northern Pacific are also vulnerable to ship collisions because the creatures cross a major trans-Pacific lane as they move to from feeding and breeding grounds.

To carry out their grim census, Wade and colleagues used two standard method of measuring whale populations. One was based on photos taken during visual sightings from airplane during the period 1998 to 2001 and again in 2008 and from ships in 2005 and 2007.

The other involved collecting biopsy tissue samples to gather genetic material, with a total of 43 taken over a ten year period. The two independent methods yielded nearly identical results – 31 individuals through photography, 28 through genotyping, thus leading more weight to the result. 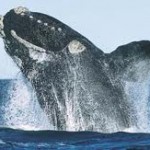