Shark finning is done by detaching off the fins from live sharks, slicing it off from the base of the fin after which they are thrown back to the sea to die. Such practice has been condemned by animal rights campaigners and blamed by scientists for a worldwide decrease of shark population.

Shark fins are used in a thick soup that is viewed as a delicacy by Chinese people and served at luxury restaurants in China, Hong Kong and Taiwan.

International conservation group, WildAid, launched a campaign in Shanghai featuring celebrities and people who would make an online pledge to stop consuming the fin soup, according to organizer.

Yao, since his retirement, remains one of China’s biggest sporting names, has stopped eating shark fin soup five years ago and has since served as an ambassador for WildAid, the group said in a statement. Branson is backing the campaign through his non-profit foundation Virgin Unite.

WildAid, which seeks to halt the trade in wildlife, estimates up to 73 million sharks are harvested annually, mainly for shark fin soup. 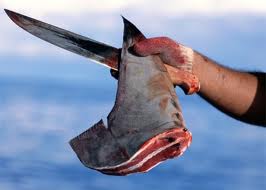