The Public Library of Science One (PLoS ONE) is publishing the study online on April 6, 2011.

Yerkes researchers Matthew Campbell, PhD, and Frans de Waal, PhD, propose that when yawning spreads between chimpanzees, it reflects an underlying empathy between them.

They studied 23 adult chimpanzees that were housed in two separate groups. The chimpanzees viewed several nine-second video clips of other chimpanzees, in both groups, either yawning or doing something else.

They yawned 50 percent more frequently in response to seeing members of their group yawn compared to seeing others yawn.

The results raise the question of whether contagious yawning among humans shows the same biases: favoring members of the same social group over different social groups.

“Our results support the idea that contagious yawning can be used as a measure of empathy, because the biases we observed were similar to empathy biases previously seen in humans.”

Contagious yawning is not just a marker of sleepiness or boredom. For chimpanzees, it may actually be a sign of a social connection between individuals. 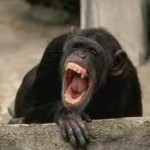