American Idol winner Scotty McCreery kicks off his debut single on Billboard with a good start.

His new single ‘I Love You This Big’ hit the airwaves and landed at the number 32 on the charts.

According to Billboard, the debut marks the highest for a brand new artist’s first single since the chart converted to BDS data the week of Jan. 20, 1990.

Scotty’s single is topping iTunes at the moment, which indicates a possible debut at number one on Billboard’s Hot 100, Hot Digital Singles and Country Digital Singles charts.

He is so far fared better in debut single performance than his previous predecessors Lee DeWyze and Kris Allen.

On the other hand Lauren Alaina, whom he defeated in the 2011 American Idol season also debuted on the charts and she’s at number 49 with her new single ‘Like My Mother Does’. 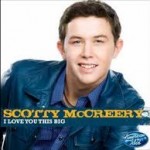