Rice is a staple food for nearly half the globe and provides a fifth of all the calories humanity consumes.

The world’s population, which swept past seven billion last year, is projected to reach nine billion by 2050.

The question now is how are we going to feed all those new mouths?

Prof. Sophien Kamoun of the Sainsbury Laboratory, a leading plant science research center near Norwich says, “Right now there are one billion people hungry around the world. In the last 11 years we added a billion people to the planet, that’s the equivalent of China. And we’re going to add another two Chinas in the next 40 years. We need a new Green Revolution.”

Bill Gates, in his foundation’s annual newsletter, is warning that the crop yields are no longer keeping pace with population growth, and that we need to ‘prioritize agricultural innovation’ if we are to avoid billions of deaths from starvation.

Bill and Melinda Gates Foundation, which invited Dr. Li to Seattle to speak to Bill Gates himself. “If you want us to help others, the Gates Foundation should step in,” Li remembers he told them. The result was a three-year grant of US$ 18 million to spread Green Super Rice across the poorest parts of the world.

With the aid of the Gates Foundation, the Global Rice Science Partnership (GRiSP) is seeking funds to expand into seven countries across Asia and seven in Africa. Some 260 people have been trained from public and private centers, including in Africa, on the use of breeding and seed production technology and now are working to put it into the hands of farmers.

Dr. Li himself embarked on a 40-day trip in early February, first to Shenzhen, where a 100-hectare rice research and testing station is to be established, then to Africa, where he was to visit Mozambique, Senegal, Mali and other countries where poverty, drought, poor farming techniques, burgeoning populations and other problems combine to keep rice yields low and rice farmers at subsistence levels.

Rice, which is grown on 142 million hectares in Asia alone and feeds more than 4 billion people, is once more taking center stage, this time because of a remarkable collaboration between thousands of scientists across the world led by the Chinese Academy of Agricultural Sciences and the Philippine-based International Rice Research Institute (IRRI).

The result is called Green Super Rice, and it has the potential to raise rice production to an optimal 14 metric tons per hectare in China from about 6.3 tons today without fertilizers or pesticides and using considerably less water. It is designed to flourish under the toughest growing conditions in the world.

Researchers believe that Green Super Rice can increase yields in Africa by six-fold, to as much as 6 tons per hectare, says Li Zhikang, senior molecular geneticist and chief scientist with the Institute of Crop Sciences at the Chinese Academy of Agricultural Sciences in Beijing. Dr. Li is the father of Green Super Rice.

Dr. Jauhar Ali, a senior scientist and regional project coordinator for the development of Green Super Rice at IRRI, said the method of producing the new strains is perhaps even more important than the rice itself. That is because it has been produced through a scientific method that also can be applied to other crops, such as wheat, barley, millet or cassava.

It can make these crops hardier and more resistant to disease and insects and cut the use of fertilizers, pesticides and water without resorting to genetic modification.

Green Super Rice itself is the result of a massive effort mostly by the Chinese government, which has poured US$ 50 million into its development since 1998 and which involves the painstaking crossbreeding of more than 250 different potential varieties and rice hybrids with the help of rice scientists from around the planet. It is the brainchild of Dr. Li, who holds a dual position with IRRI as a molecular geneticist. 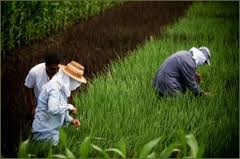