Of all the Transparency International (TI) watchdog indices, The Corruption Perception Index (CPI) seems to be the most controversial after some quarters questioned its validity, arguing that it should be evidenced based.

Craig Fagan, TI Senior Policy Coordinator for Policy and Research that the CPI, which ranks countries in terms of the degree of corruption among public officials and politicians as perceived by business people and country analysts, is based on corruption related data from 13 different expert and business surveys.

Fagan lamented that corruption has long been a pervasive phenomenon and has become an innate lifestyle of those powerful people who keep abusing their power for their personal gain at the expense of development and democracy.

According to him, TI is not closing its doors to governments, civil society groups, companies or even private individuals to fully carry out its mandate as a global coalition waging war against corruption. He noted that the holistic approach of stamping out corruption involves both the public and private sectors of society.

If corruption is not addressed, it would breed a culture of poverty, inequality, poor public governance and even environmental degradation according to watchdog Transparency International.

“No to corruption” has long been a longtime battlecry of Transparency International, the worldwide non partisan civil society organization campaigning against corruption, since its establishment in 1993.

Though the largest portions of its funds come from some development agencies, the watchdog is still “keeping its credibility” and never allows anyone or government to dip its fingers into the TI’s anti-corruption initiatives. Credibility matters when one fights corruption, Fagan said.

In last years CPI rankings, the Philippines ranked 139th out of the 180 countries along with Pakistan and Bangladesh.

Transparency International is relaying a wake up call for the Philippines by keeping an eye on President Aquino to see if he is fulfilling his promises to promote transparency and address the stigma of corruption in the Philippine bureaucracy.

Samantha Grant, TI’s program coordinator for Asia and the Pacific said she is hopeful that the Aquino government would stand by its principles in fighting against corruption to improve the lives of the poor Filipino people.

Grant expressed optimism that Aquino, whose integrity has not been tainted by corruption, could introduce reforms of the bureaucracy, and if his government would sincerely implement anti corruption drive, the Philippines’ ranking in the CPI would “possibly” be changed. 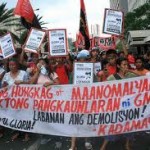