The World’s population will likely reach 9.2 billion in 2050, with nearly three times as many people over the age of 60 and virtually all growth in the developing world, the UN Population Division reported.

The report also estimates 32 million fewer deaths from AIDS during the 2005 to 2020 period in the 62 most affected countries compared with the previous UN estimate in 2004.

Fertility has already reached below replacement levels in 28 developing countries which account for 25 percent of the world’s population, including China, the report said.

If fertility levels are slightly higher than projected, global population would reach 10.8 billion in 2050, and if they were slightly lower, it would hit 7.8 billion the report said.

The population of poor countries like Afghanistan, Burundi, Cogo, Guinea-Bissau, Liberia, Niger, East Timor and Uganda are projected to at least triple by mid-century.

By contrast, the population of richer developed countries is expected to remain largely unchanged at 1.2 billion.

According to the report, 46 countries are expected to lose population by mid century including Germany, Italy, Japan, South Korea, most of the countries in the former Soviet Union and several small island nations.

Population growth will remain concentrated in populous countries with half the projected increase from 2005 to 2050 in eight countries listed according to the size of their expected growth, India, Nigeria, Pakistan, Congo, the United States, Bangladesh and China, the report said.

Half the increase in world population between 2005 and 2050 will be the result of a rise in the over age 60 population while the number of children under age 15 will decline slightly.

Today, just 8 percent of the population in the developing countries is over 60 years old, but the report said that by mid-century the figure will rise to 20 percent. 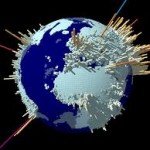