Sexual Abusive priests who have been a perennial problem since time immemorial preying on male and female young victims alike have tarnished the image of the Catholic church to be the bastion of moral ascendancy.

Most of these cases are cases unclosed that piled up one after the other in different parts of the globe for decades.

The trending of these immoral acts worldwide are equally annoying and alarming since most of these church scalawags have not been brought to the court of justice to pay for their crimes.

A news dispatch from (Agence France-Presse) dated September 13, 2011, has revealed that an international group for victims of sexual abuse by priests said Wednesday they were suing Pope Benedict XVI through the International Criminal Court (ICC) for crimes against humanity.

The Survivors Network of those Abused by Priests (SNAP) said it had filed a complaint calling on the ICC to “take action and prosecute the Pope” for “direct and superior responsibility for the crimes against humanity of rape and other sexual violence committed around the world.”

In a statement, SNAP said members from Germany, Belgium, the Netherlands and the US had traveled to The Hague with human rights lawyers to urge prosecutors to investigate the pope and three other high-ranking Vatican officials.

The US-based group also submitted more than 20,000 pages of supporting materials including “reports, policy papers, and evidence of the crimes by Catholic clergy committed against children and vulnerable adults,” it said.

The Roman Catholic Church is struggling to deal with rising anger and a string of lawsuits following thousands of child abuse claims in Europe and the United States. 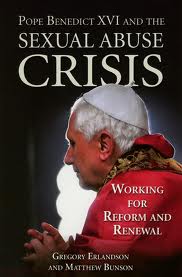