Some people develop acid reflux for no known reason while others have a problem with the muscle at the bottom of their esophagus.

A study of almost 30,000 people in Norway found women seem to develop the condition more than men, while severe symptoms tend to affect the middle-aged to a greater extent.

Women under 40 were the least likely to have any acid reflux, but were more likely to develop symptoms as they aged. The prevalence was stable among men, regardless of their age.

Symptoms of the condition, known in full as gastro-esophageal reflux disease (Gord), include heartburn, an unpleasant sour taste in the mouth caused by stomach acid coming back up and difficulty swallowing.

The condition has been linked to obesity, diets high in fatty foods, alcohol and smoking, and is associated with an increased risk of esophageal (gullet) cancer.

Almost all of those with severe acid reflux experienced symptoms used medication to treat them at least once a week, compared with 31 percent of those with mild symptoms.

The researchers, from Norway, Sweden and King’s College London, said: “The increasing prevalence of acid reflux is alarming, because it will most likely contribute to the increasing incidence of cancer of the esophagus in the western population.”

Acid reflux symptoms can spontaneously disappear without medication, but this happened to just over 2 percent of those with symptoms each year during the study. Women under 40 were the most likely group to have their symptoms disappear of their own accord. 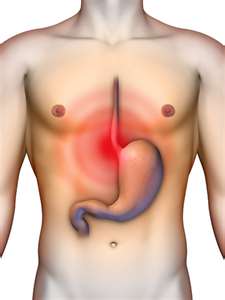