Adam Scott and Jason Dufner share the lead in the opening round of WGC Cadillac Championship at Doral, Miami, Florida.

Tiger Woods and Rory McIlroy trail by 6 and 7 shots respectively. Woods managed only an even par 72 while Mcilroy a one-over-par 73 .

McIlroy’s score was three better than Lee Westwood, while Luke Donald , who could take the top spot back off McIlroy this week, shot 70.

Westwood’s 76 probably rules him out of the victory which could have restored him to the world number one spot he relinquished to Donald last May. 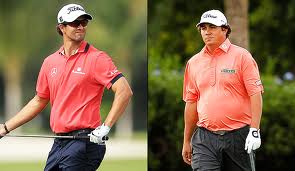