The plan to channel 53 kilometers (33 miles) stretch of the Danube near the Serbian border would destroy natural banks and turn the river into ‘a lifeless channel’ threatening fish and bird populations, according to World Wildlife Fund (WWF).

The area’s Kopacki Rit natural reserve is the most valuable and best preserved swamp area on the waterway, and warned the channeling would affect the river’s inflow into the reserve, said the environmental watchdog.

On the other hand, Croatian authorities say the channel projects will improve navigation and point to a recent study ordered by the national water management agency that said the project would not harm the environment.

However, environmental activists rejected Croatia’s government stand. “Such conclusions are scandalous and contrary to Croatia’s international obligations to protect the Danube region,” a WWF statement said.

The group said the study did not meet international environmental protection standards and called on Croatia to abandon the project.

Austria, Croatia, Hungary, Serbia and Slovenia signed a deal to launch a cross-border nature reserve in 2011, to create the world’s first five-country protected area, described as ‘Europe’s Amazon’ because of its rich biodiversity.

It includes rare floodplain forests and river islands and is home to Europe’s highest density of breeding pairs of white-tailed eagle and endangered species such as the little tern, black stork and otters. 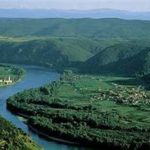