Agricultural lands in parts of Japan is no longer safe because of high levels of radiation in the soil, scientists have warned, as the country struggles to recover from the Fukushima atomic disaster.

An early study suggested that harvests contained levels of radiation well under the safety limit for human consumption.

Now, an international team of researchers suggests this result deserves a second
look.

Researchers took measurements of the radioactive element caesium-137 in soil and grass from all but one of Japan’s 47 regions and combined these results with simulations based on weather patterns following the meltdown.

The study was led by Teppei Yasunari of the Universities Space Research Association in the US state of Maryland.

Caesium-137 lingers in the environment for decades, and so is more of a concern than other radioactive elements released in the cloud of steam when the reactors’ cooling systems failed, leading to explosions.

The team found that the area of eastern Fukushima had levels of the radioactive element that exceeded official government limits for arable land.

A team of international researchers said food production would likely be ‘severely impaired’ by the elevated levels of caesium found in soil samples across eastern Fukushima in the wake of meltdowns at the tsunami hit plant.

The study, published in the Proceedings of the National Academy of Sciences journal, suggests farming in neighboring areas may also suffer because of radiation, although levels discovered there were within legal limits.

The researchers estimate that caesium-137 levels close to the nuclear plant were eight times the safety limit, while neighboring regions were just under this limit.

The study showed that most of Japan was well below (average about 25 Bq/kg) the safety limit.

Relatively low contamination levels in western Japan could be explained by mountain ranges sheltering those regions from the dispersal of radioactive material, the authors said. 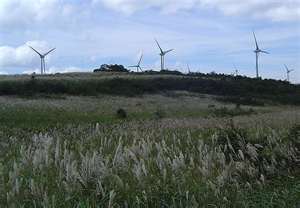