The much awaited pairing of Tiger Woods and Adam Scott will take place on the opening day of the Presidents Cup at Royal Melbourne.

The match up, will eventually reunites the former world no.1 with his former caddie Steve Williams now working with Scott.

Just last month, Williams the former caddie of Tiger Woods, has made controversial remarks where what considered by many, as a racial slur against Woods.

The New Zealander Williams later apologized online and to Woods in person. The American was too forgiving, that he doesn’t want to blow up the issue and instead wanted to move on.

Woods will play alongside with Steve Stricker while Adam Scott to play along with South Korean KJ Choi.

The Woods and Stricker tandem had recent success at both the Presidents and Ryder Cups and be again set to intimidate the hosts at Royal Melbourne this week.

The American duo combined to win all four of their matches in a tournament first to carry their team to an emphatic victory at San Francisco two years ago.

Team captain Fred Couples could be tempted to re-unite them for a tilt at a fourth successive American victory.

World number five Stricker on Monday declared himself fit after a lengthy layoff with a neck injury and Woods was thrilled to see him in full swing during Tuesday’s first official practice. 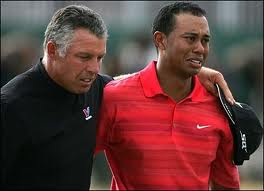