An immense of green algae covering an area of about 50 square miles is moving towards the eastern part of China’s east coast.

It could be seen off the eastern provinces of Shandong and Jiangsu, citing a spokesman for the North China Sea Branch of the State Oceanic Administration.

Algae blooms are typically caused by pollution in China and suck up vast amounts of oxygen needed by marine wildlife to survive, while leaving a foul stench when they wash up on beaches.

In the Beijing Olympic Games of 2008, a vast offshore algae bloom threatened the sailing competition when it engulfed waters surrounding the event’s venue in the coastal city of Qingdao in Shandong province.

Chinese volunteers as well as military personnel were commissioned to clear up the water with more than a million tons of the foul-smelling algae in time for the Olympics.

In the springs of 2009 and 2010, an algae bloom also hit Qingdao province, where more than a thousand dry-weight tons of algae was cleaned up for last year alone, the city government has said. 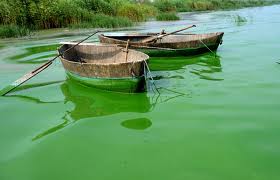