In 1906, a German neurologist named Alois Alzheimer studied the brain of a woman who died after years of senile dementia. He found it odd that the cerebral cortex of the woman, the part of the brain for reasoning and memory was a knot of tangles and plaques.

Alzheimer thought that this was responsible for the woman’s dementia. In later years, this feared malady of old age was called Alzheimer’s disease or Alzheimer’s type of dementia. In American adults, it is the fourth leading cause of death after heart disease, cancer and stroke.

Alzheimer’s disease is a progressive destruction of the brain affecting people over sixty five years old. It is marked by profound mental decline with deterioration of memory, comprehension and speech. It is fatal. While not everyone who grows old gets Alzheimer’s, increasing age in itself the main risk factor.

Other factors are family history, genetics, being female (13% higher than males) and the environment (Japanese who migrated to Hawaii had a higher incidence of the disease compared to native Japanese).

The Alzheimer’s Association lists ten signs and symptoms of early disease which are as follows:

1) Memory loss affecting job skills – Forgetting on how to do things.

3) Forgetting time and place – One who feels lost standing outside the house.

4) Loss of judgment – exhibited strikingly as inappropriate dressing, wearing his or her underwear like a veil.

5) Problem with abstract thinking – One has forgotten the number seven.

6) Misplacing things – One used the toothbrush but stored it in the freezer.

7) Changes in mood – One who cries and laughs in a matter of minutes.

8.) Changes in personality – One who becomes paranoid and will not leave his or her room.

9) Loss of initiative – One who is no longer interested in seeing his or her relatives and grandchildren.

Preferably, a neurologist eliminates and sort this out by usual history taking, physical examination and perform psychological and verbal tests on the patient.

Unfortunately, the only definite examination is postmortem! This does not stop clinician from proposing the diagnosis to the family.

The aforementioned warning signs help draw a high suspicion of Alzheimer’s. There is no cure for it and it cannot be reversed.

In 1993, tacrine hydrochloride becomes the first drug approved for use in Alzheimer’s. However, it can only delay progression of the disease for six months. Treatment for symptoms such as aggressive behavior, insomnia and depression are available.

The best defense for the disease is a healthy lifestyle. The production of the senile plaques found in the brain of Alzheimer’s sufferers implicates exposure to free radicals. So it may be good idea to avoid smoking, avoid second hand smoke, avoid getting near to any machines or engines that blow thick smoke.

Eating right and exercising keeps the body including the nerves in good shape. Alzheimer’s is incurable and prevention is at best speculative. 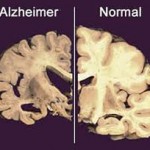