The Brazilian Amazon is home to about 40 percent of the planet’s tropical forests and a staggering amount of biodiversity.

However, the Amazon’s plant and animal species are under threat by deforestation, mostly due to agriculture and cattle ranging.

During the last half century, the Amazon has lost at least 17 percent of its forest cover, according to World Wide Fund for Nature (WWF).

When species lose their natural habitat to deforestation and other causes, they don’t immediately disappear.

Instead, they gradually die off over several generations, racking up an ‘extinction debt that must eventually be paid in full.

New research shows that the Brazilian Amazon has accrued a heavy vertebrate extinction debt, with more than 80 percent of extinctions expected from historical deforestation still impending.

While the results are alarming, this deathly time lag provides a conservation opportunity to save some of the disappearing species, scientists said, stressing that actions taken in the next few years are critical.

“Now that we know where the extinction debt is likely to be, we can go to the ground to restore habitat and take remedial actions to try to regenerate new habitats,” said study lead author Robert Ewers, an ecologist at Imperial College London in the U.K. “We can try to put off ever having to pay that debt.”

Ewers and his colleagues set out to determine how many species would be lost from at least part of their historical habitats in the Amazon because of past and future deforestation.

They began by looking at the “species-area relationship,” a well-established ecological pattern describing how the number of species in a given habitat increases predictably as the habitat area increases.

By turning this idea on its head, you can figure out how many species should go extinct as their habitat shrinks.

Next, Ewers and his team used their model to estimate the magnitude of the local extinctions and extinction debts expected to occur in four scenarios, which mainly differ in their projections of future deforestation rates.

Under the most likely scenario, every forest block will lose an average of about nine vertebrate species and be in debt for another 16 species by 2050.

Thiago Rangel, an ecologist at the Federal University of Goiás in Brazil who wasn’t involved in the research, was surprised to see the Amazon’s huge extinction debt. “Of course, that gives Brazil a very good opportunity for conservation measures.”

Rangel stresses that Brazil must “default on its extinction debt,” possibly by creating more conservation areas, particularly in places that have been abandoned by agriculturalists. Whatever the case, something needs to be done soon, he said.

Ewers agreed. “This problem has been building, and it will soon roll over and crash like a wave,” he said. 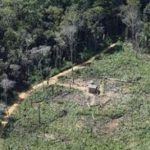