Phobic anxiety is a common form of psychological stress, like agoraphobia (fear of open spaces) or claustrophobia (fear of enclosed spaces) which involve intense fear triggered by common circumstances that would not be present to others.

Researchers use the length of a cell’s telomeres to determine the cell’s age and how many more times is, will replicate.

Scientists looked at telomere length in more than 5,200 women, aged 42 to 69. Telomeres are the caps on the ends of chromosomes that protect our genetic material from damage.

Shortened telomeres have been linked to an increased risk of cancer, heart disease, dementia and death.

Women with an unreasonable fear of situations such as crowds or heights had shorter telomeres than their calmer peers and were found to be aging more quickly. They are considered markers of biological or cellular aging.

When a cell stops replicating, it enters into a period of decline known as ‘cell senescence,’ which is the cellular equivalent of aging which is vital in anti aging research.

Scientists have noticed that cells stop replicating when telomeres are shorter. In humans, a cell replicates about 50 times before the telomeres become too short. The limit of the process is known as the Hayflick limit in honor of the scientist who discovered it.

Study author Dr. Olivia Okereke of the Brigham and Women’s Hospital (BWH) department of psychiatry, said, that ‘this study is notable for showing a connection between a common form of psychological stress, phobic anxiety and a plausible mechanism for premature aging.

However, this type of study design cannot prove cause and effect or which problem came first — the anxiety or shorter telomeres.’

The findings open the door to further research into the link between anxiety and changes in telomere length.

However, another reason telomeres are important is cancer. Cancer is a condition in which certain cells in your body stop dying.

Every system in your body is carefully balanced to allow for cells replicating and dying. If cells stop dying and keep replicating, the balance is disrupted and there are too many of one kind of cell. 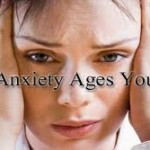