Elderly persons are being denied cholesterol lowering drugs, statins, by general practitioner (GP) that could have averted strokes and heart attack, experts say.

Oxford and Birmingham university researchers had found the elderlies are largely ignored after reviewing at prescribing for nearly 37,000 people.

They found for blood pressure-lowering drugs prescribing dropped after the age of 85, while for treatment for high cholesterol, the fall started at 75.

Many of the over 75s are not offered statins to reduce cholesterol or pills for high blood pressure that are routinely given to other patients.

Researchers believe that GPs are reluctant to prescribe such medication for the elderly as they are worried about the possible side effects.

This should not be happening, researchers said, pointing out that blood pressure drugs had been shown to help reduce the risk of heart disease in the elderly, while there was nothing to suggest statins should not be used.

Nina Barnett, a consultant pharmacist and spokeswoman for the Royal Pharmaceutical Society, said: ‘Age alone is not a reason to withhold evidence based drugs from patients, any decisions regarding treatment should consider the patients clinical condition, in particular other diseases which may impact on outcome.’

Dr. James Sheppard from the University of Birmingham, said statins and pills for high blood pressure ‘have the massive potential for benefit’.

Statins are used to reduce the amount of bad cholesterol on arteries and are often prescribed to patients who have suffered heart attacks or strokes.

The lack of drug trials on older patients made many doctors cautious about prescribing medication for them, and there was conflicting evidence over the benefits and possible risks of statins, said Dr. Sheppard.

As drug trials are rarely carried out on older patients, there is virtually no evidence on whether they work or are even safe.

But a team of academics from Oxford and other universities warn that the elderly are being largely ignored by the National Health Service’s prescribing habits.

Such drugs could have helped avert the strokes and heart problems that cause pain and disability for people at the end of their lives, they claim.

The researchers also believe that the medication could have prevented many premature deaths.

An older person may be more vulnerable to particular side-effects, or already be on multiple medicines for other health conditions, meaning it isn’t always appropriate to prescribe additional medicines.’

Statins can cause muscle pain and digestion problems. Drugs for high blood pressure, including ace inhibitors and alpha and beta blockers, can cause drowsiness and dizziness. 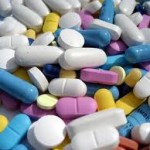