The family of legendary actor John Wayne will be offering an expansive collection of never-before-released personal and professional memorabilia from the movie star’s personal archives for public auction this fall.

Among the items in the collection are one of the iconic black eye-patches worn by John Wayne in his 1969 Academy Award winning role in True Grit, the cowboy hat he wore in the film’s 1975 sequel, Rooster Cogburn, and more than 400 other costumes, scripts, personal documents and awards that will be available to fans for the first time.

Additional items included in the auction are John Wayne’s Golden Globe award for Best Actor for his role in True Grit; costumes from such movies as Sands of Iwo Jima and The Green Berets; and more than 50 movie scripts from such celebrated John Wayne films as True Grit, The Green Berets, Stagecoach, Rio Lobo, Hellfighters and The Sons of Katie Elder. Many of the scripts are annotated with John Wayne’s handwritten notes.

Pre-sale estimates range from US$ 100 to US$ 50,000 dollars each depending on the item. Items offered in the auction will be accompanied by a certificate of authenticity from the Wayne family and Heritage Auctions, the world’s third largest auction house appointed by John Wayne Enterprises (JohnWayne.com). 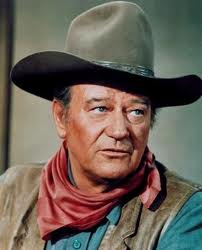