Thefts for rhinoceros horns as many as 30 for this year have been reported in museums, galleries, antiques dealerships, auction houses and homes across Europe.

Criminals try to feed a growing demand in China and other Asian countries, where medicine from ground rhino horns is believed to be an aphrodisiac and to cure diseases.

Rhino experts take great pains to rebut the claims that the horns have medicinal value. Dr. Raj Amin, a researcher at the Zoological society in London, said recently on an episode of ‘Nature’ on American public television that ingesting rhino horns would be about as healthful as “chewing your own nails.”

The law enforcement organization Europol says the thefts are believed to be the work of an organized gang of itinerant people known as Irish travelers, who are also involve in drug smuggling and money laundering.

Since January the horn thieves have struck a Czech castle; natural history museum in Belgium, Germany, France and Italy; and other targets in Portugal and Sweden.

In England, the Ipswich Museum contains many alluring and potentially theft worthy items. When thieves forced their way on July 28, after midnight, they were seeking something else entirely.

Their target, a large rhinoceros horn which was still attached to its owner. It has been there in the museum since 1907. “They just snapped it off,” said Bryony Rudkin, the Ipswich Borough Council member in charge of culture.

Ian Lawson, a detective in the art and antiques unit at the Metropolitan Police Service in London, said that galleries and museums are being urged to keep images of their rhinos off their Websites, to lock the horns away, or, as the Natural History Museum in London has done, to replace them with fake horns.

While rhino horns have recently sold for up to US$ 200,000 dollars, the powder is reported to fetch about US$ 97,500 a kilo on the black market more than gold, heroin or cocaine according to Mr. Lawson.

Stricter laws governing the sale of used rhino horns, the kind found on rhinos that were long ago killed by big game hunters and stuffed have also played a part.

The crackdown has inadvertently threatened the efforts of conservation groups to preserve wild rhinoceros in Africa, as the thieves have turned to poachers who hack off horns from live animals, often leaving the rhinos bleed to death, said Cathy Dean, director of Save the Rhino, an advocacy group in Britain.

There have been 260 rhino deaths this year from poaching in South Africa alone, she added. The problem was a major focus of the recent meeting in Geneva of the Convention on International Trade in Endangered Species.

This year Britain and other European countries tightened their regulations, making it virtually impossible to export most rhino horns from the European Union legally, thus increasing the value of purloined ones. 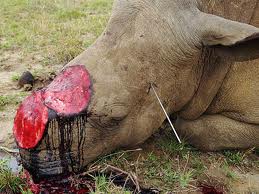