The homecoming week in ‘American Idol,’ is a yearly tradition where the top 3 finalists have their moments spent in their respective hometowns.

It is a moment for finalists’ bonding with their friends, family, fans, loyal supporters.

The top 3 contestants has to shed some entertaining numbers as a token of their gratitude to the people who supported them all the way on their ‘American Idol’ quest for this year.

*** Scotty McCreery, 17, is from Garner, North Carolina, his homecoming celebration were attended by over 30,000 fans for the weekend. He made a stop in his old job, as a bag boy at Lowe’s Foods, meet his friends, co-workers and his manager there. Then he stopped at Lake Benson Park, where he was met by thousands of screaming, crying fans to cheer him up. Mayor Ronnie Williams gave him the key to the Town of Garner and proclaimed May 14, as “Scotty McCreery Day.” Scotty sing his self-described theme song, “Your Man,” but to his surprise, singer Josh Turner appeared with some of his band mates and made it a duet with him. The duo delivered a sweet rendition that’s sure to be good practice for Scotty, whose Top 3 song included the judges’ choice of Kenny Rogers’ “She Believes In Me.”

*** Lauren Alaina, 16, is from Chattanooga, Tennessee, she has been away for 3 months before returning to Atlanta. She started her day at the FOX station in her hometown of Chattanooga and continued on to the AT&T store. Then, she led a parade through the city, joined by bands from Soddy Daisy High School and Fort Oglethorpe Lake view High School, her Alma mater. Hundreds of students waited to greet her at the school, where a huge banner hung that read, “We Support Our Lauren Alaina!” She also made a point to stop in tornado-ravaged Ringold, Georgia. Another parade followed, where she was met by thousands of screaming supporters at Coolidge Park. There, Mayor Littlefield handed her a key to the city and she gave a heartfelt thank you to her fans. She rendered a few songs in time for her next week’s show, where she’ll sing the judges’ choice song for her, Lee Ann Womack’s “I Hope You Dance.”

*** Haley Reinhart, 20, is from Deer Park, Illinois, Chicago and she started her homecoming with a jam-packed day of fans, photos, autographs, and as suburban Chicagoans, came out in droves to support their “Idol” candidate. In Deer Park, she met about 200 fans despite the drizzly weather. After pictures and autographs, fans begged Haley to sing where she politely declined, but promised to put on a show later that night at Arlington Park. Then, she returned to her Alma mater, Wheeling High School, in a gymnasium filled with 400 fans clad in printed “Haley” T-shirts anxiously awaited her arrival and delighted in the time she spent answering questions about her Idol journey. Her mini-concert at Arlington Park , during which she was joined onstage by her parents Harry and Patti, was, by local accounts, spectacular, drawing nearly 30,000 people in inclement weather. Haley’s fans, next week, will get to hear her best attempt at the Judges’ choice song, Alanis Morrisette’s hit, “You Oughtta Know.” 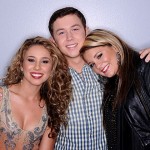