It was the second time Djokovic defeated Nadal on clay after winning the Madrid Open and four in a row that the Serbian defeated the Spaniard in a Master’s final.

Djokovic has won all seven tournaments he’s played this year, including the Australian Open, and will be considered the favorite going into the French Open which starts next Sunday.

The world number two, who lost all of his eight previous matches on clay against the Spaniard before his Madrid triumph, is also homing in on Nadal’s top ranking.

Nadal said he simply had to pay tribute to the man of the moment. “He’s doing amazing things, he’s very tough mentally and physically,” said the Spaniard of Djokovic. 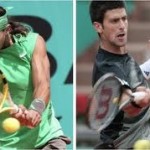