A prize-winning light bulb, known as led bulb that lasts for 20 years is going on sale in the US starting on Earth Day.

The bulb triumphed in the Bright Tomorrow competition run by the US Department of Energy (DoE) that aimed to find an energy efficient alternative to the 60-watt incandescent light bulb.

The DoE challenged firms to develop a design that gave out a warm light similar to that from an incandescent bulbs but was much more energy efficient.

Philips was the only entrant for the competition and its design underwent 18 months of testing before being declared a winner.

A cheaper and less efficient version of the LED bulb is already sold by Philips in the US and Europe.

LED bulbs face competition from compact fluorescent lights which are almost as energy efficient and cost a lot less.
Philips LED bulb LED bulbs should last about 100,000 hours, giving them a life of about 20 years.

Made by Dutch electronics giant Philips, the bulb swaps filaments for light-emitting diodes to provide illumination.

Sales of more energy efficient bulbs are being aided by official moves to end production of higher wattage incandescent bulbs. 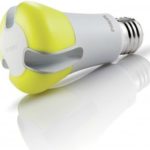 2 thoughts on “An Energy Efficient Led Bulb That Has Twenty Years Life, Now Available In The Market”