Anders Behring Breivik is due to stand trial on Monday over a bomb attack and shooting spree last July that killed 77 people in Norway.

A second psychiatric evaluation of the Norwegian mass killer Breivik has found him sane enough to face trial and a jail term.

The findings contradict a previous evaluation, published in November, that found him legally insane.

Both reports will be considered by the court when it decides whether he should be sent to a psychiatric ward or jail.

The new assessment was made by psychiatrists Terje Toerrissen and Agnar Aspaas on a request from the court after widespread criticism against the first diagnosis.

Breivik has always insisted he is mentally stable, admitting he carried out the attacks and saying they were an atrocious but necessary part of a ‘crusade’ against multiculturalism and Islam, but denying charges of terrorism.

The latest assessment is likely to be welcomed by Breivik and his lawyers.

If the court concludes that he was sane at the time of the killings then Breivik could face 21 years in prison with the potential for indefinite extensions to his term as long as he is considered a danger to the public. 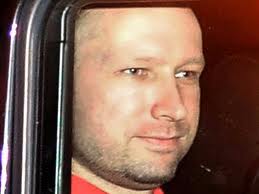