A .0019 millimeter thick ultra thin solar cell device, thinner than a thread of spider silk, so flexible they can be wrapped around a single human hair have been invented by scientists.

The fact it is extremely thin, light and flexible paves the way for a number of new future uses, including portable electrical charging devices or electronic textiles worn on clothing.

The ultra-thin film consists of electrodes on a plastic foil and measures only 1.9 micrometers in thickness, a tenth of the thinnest solar cells currently available, according to researchers in Austria and Japan.

Tsuyoshi Sekitani, from the University of Tokyo, added: “Being ultra-thin means you don’t feel its weight and it is elastic.

Solar power is the focus of growing attention among scientists and consumers like in Japan, as the public increasingly favors alternative energy sources following last year’s nuclear crisis in Fukushima.

It is hoped that the new ultra-thin solar cells, which were created jointly by researchers from Johannes Kepler University of Austria and contributors from University of Tokyo, will be put to practical use within around five years.

The research team are now working on increasing the rate at which the device is able to convert sunlight into electricity in order to apply it to specific appliances, as well as exploring an increase in cell size, according to Dr. Sekitani.

“Power generation by solar cells increases with their size,” Dr. Sekitani revealed. “As this device is soft, it is less prone to damage by bending even if it gets bigger.”

The research was unveiled in a report published by the on-line science journal Nature Communications. 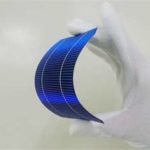